Lessons I Learned From My Father 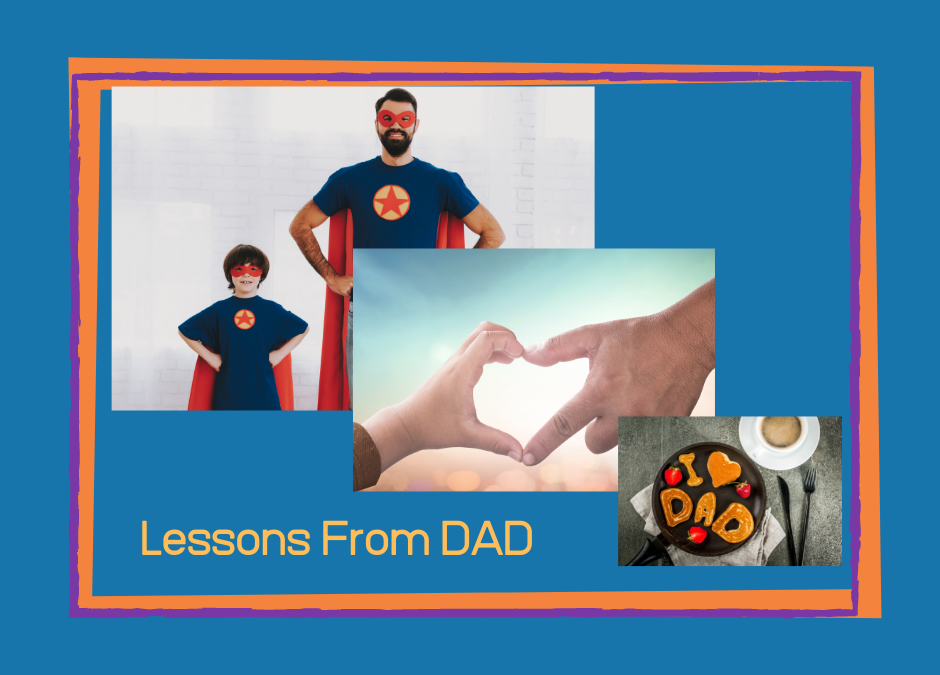 One of the biggest issues I come across as a parenting coach, mentor and educator is the battle of the extended family. Where the generations have different perspectives.

Current parents knowing they want something different to the way their parents raised their kids.

In the process there is so much self-doubt and second guessing.

A bit of internal family conflict and resentment with the upper generation crossing the boundaries into “guiding” their adult children on how they could be doing better. So many junior generation parents doing more and trying harder to be the perfect parent.

What research has shown is that perfection in parenting is not a requirement. In fact good enough is great, because it enables kids to be ok with making mistakes and learning as they go. Having that modelled by their parents.

My dad was not a typical dad in his generation. He carried more of the parenting load than average dad’s at the time. 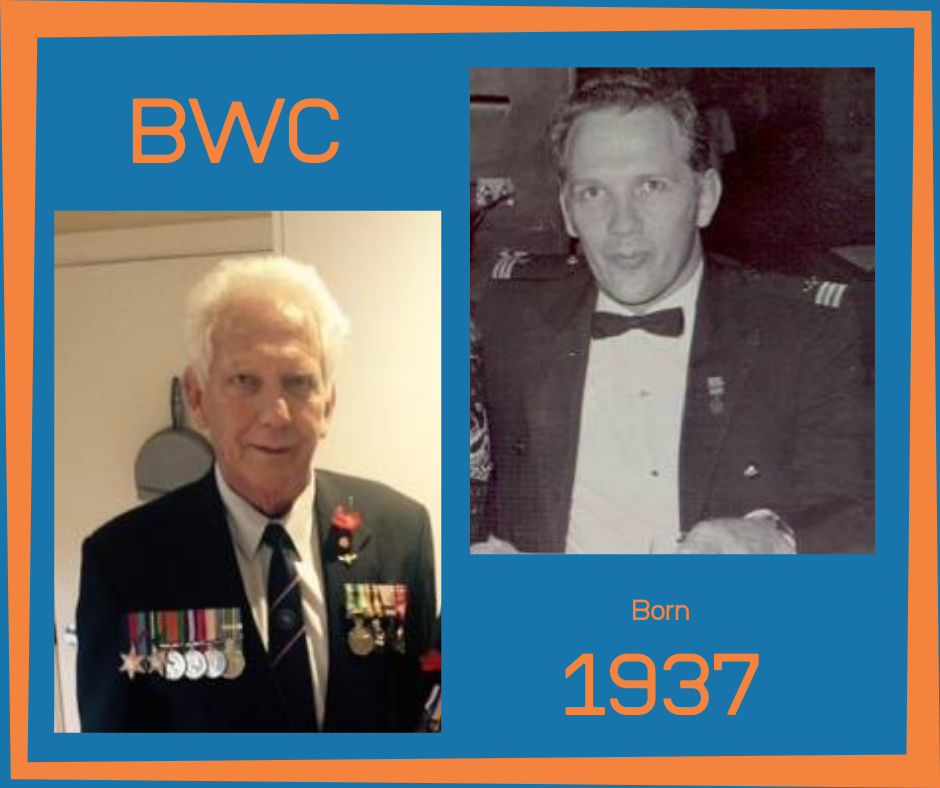 My dad was born in 1937, at the end of the depression and a little before the second world war. He came from a really poor family brought up as the youngest of eight children. They lived in a variety of homes around the south of Western Australia due to his father’s work as a sawyer in the logging industry.

His family was fairly poor, he didn’t get his first pair of shoes until he went to high school.

Dad’s a naturally gifted athlete and smart as a whip. Though I say he has a twisted mind because he’s one of these people who does cryptic cross word puzzles for fun.

He’s also a man that due to circumstances ended up being a pretty atypical dad during the early years of our life. My dad was not quite as hands on as the current generation of dad’s and way more than was typical back then in the early 1960s.

Dad left home when he was 16 1/2 in 1954, going off from his home in country Western Australia all the way across to the other side of the country to begin an apprenticeship in the Royal Australian Air Force.

Funnily enough, my parents were born in the same hospital in WA, though met when they were both in the RAAF on the other side of the country. A career that my sister one down and I both followed, as did my younger son. 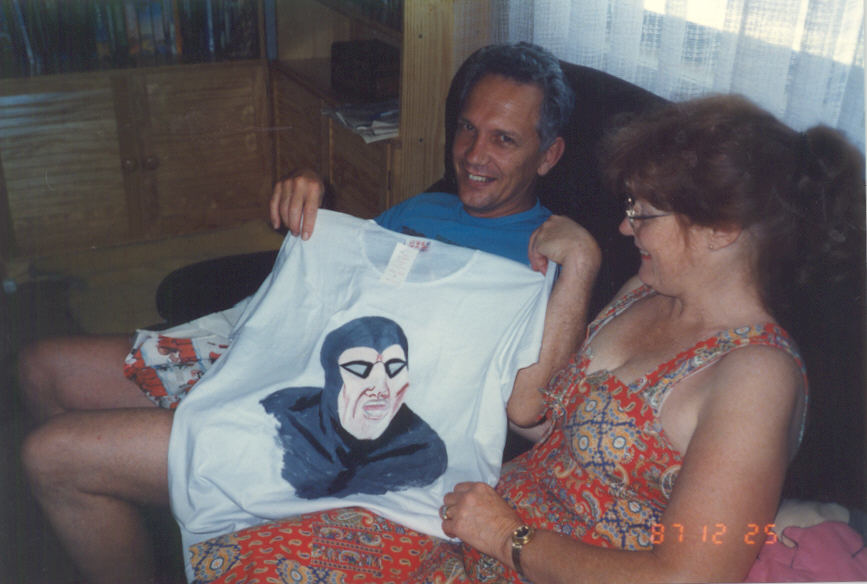 My dad has a pretty dry sense of humour and as a man of his generation he would joke that he just had the balance of power in our house with three daughters, plus mum.

I don’t know that it was ever really about power to him, because that’s not the way we were raised.

He certainly ended up having to do lots of things that the average man in his generation didn’t do because my mum was often unwell. Meaning that my dad carried a load that many dads didn’t in those days.

Not quick to Anger

My dad, was not quick to anger, though beware if we crossed the line.

He was very much a member of the parenting team, carrying as much of the load as he could to support my mum, especially in the early years. Though was also away from home 12 hours a day working at the rocket range at Woomera, on the Jindavyk program.

He played lots of sport, and we as a family would go off to all sorts of weekend sporting events when he was at home. That when we were old enough going off to our events became the model in our family. Then I married a similar sporty guy, and we repeated the pattern in our family.

My dad taught us to be tolerant, accept everyone as they are. Even though the language of my parents sounded less than tolerant at times, it was the language of their time. Used with no malice intended.

A man of insatiable curiosity, passed along to us. A huge desire for learning and gaining knowledge. 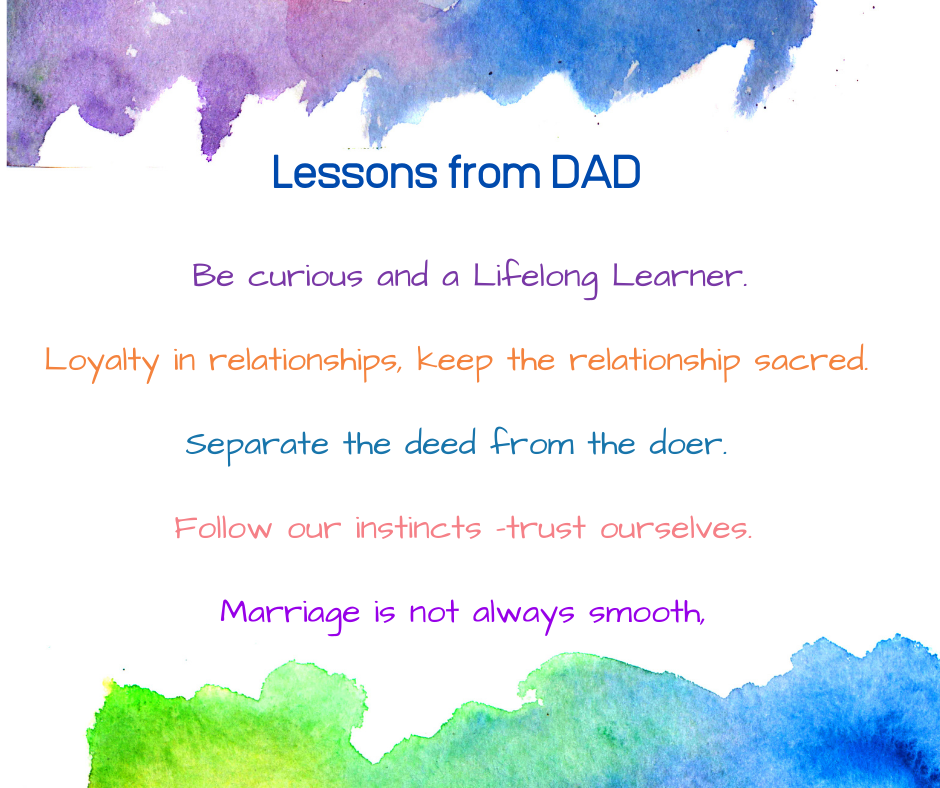 Be curious and a Lifelong Learner.

I’ve had to shift that value along to wisdom to enable progress in my personal journey.  It can be a trap to be in perpetual potential aka accumulating knowledge.

When my first marriage broke down, the biggest most powerful lesson I learned was to NEVER talk ill of my EX, because even though I may no longer be part of the ex’s life, he was still the father of our son.  Our son’s relationship with his father.  It was appropriate to fire wall my relationship with my son’s father from his relationship with him.  Not our son’s business to be caught in the middle, nor his responsibility to look out for our feelings.

Separate the deed from the doer.

We may not like the behaviour, we can still accept the person.  Part of his tolerance and acceptance, built into the culture of our family.

While he may not have always agreed with our choices, he was generally supportive. 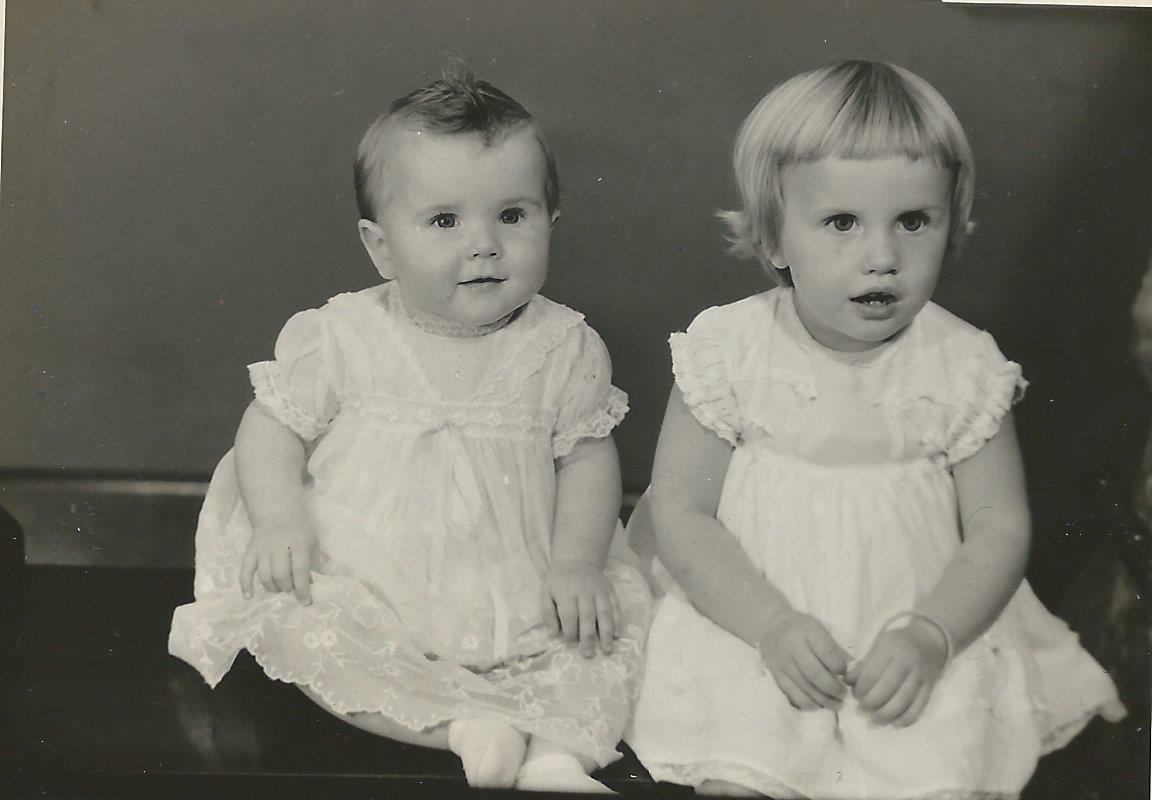 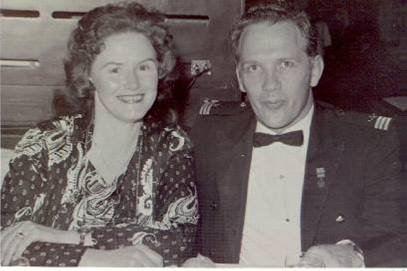 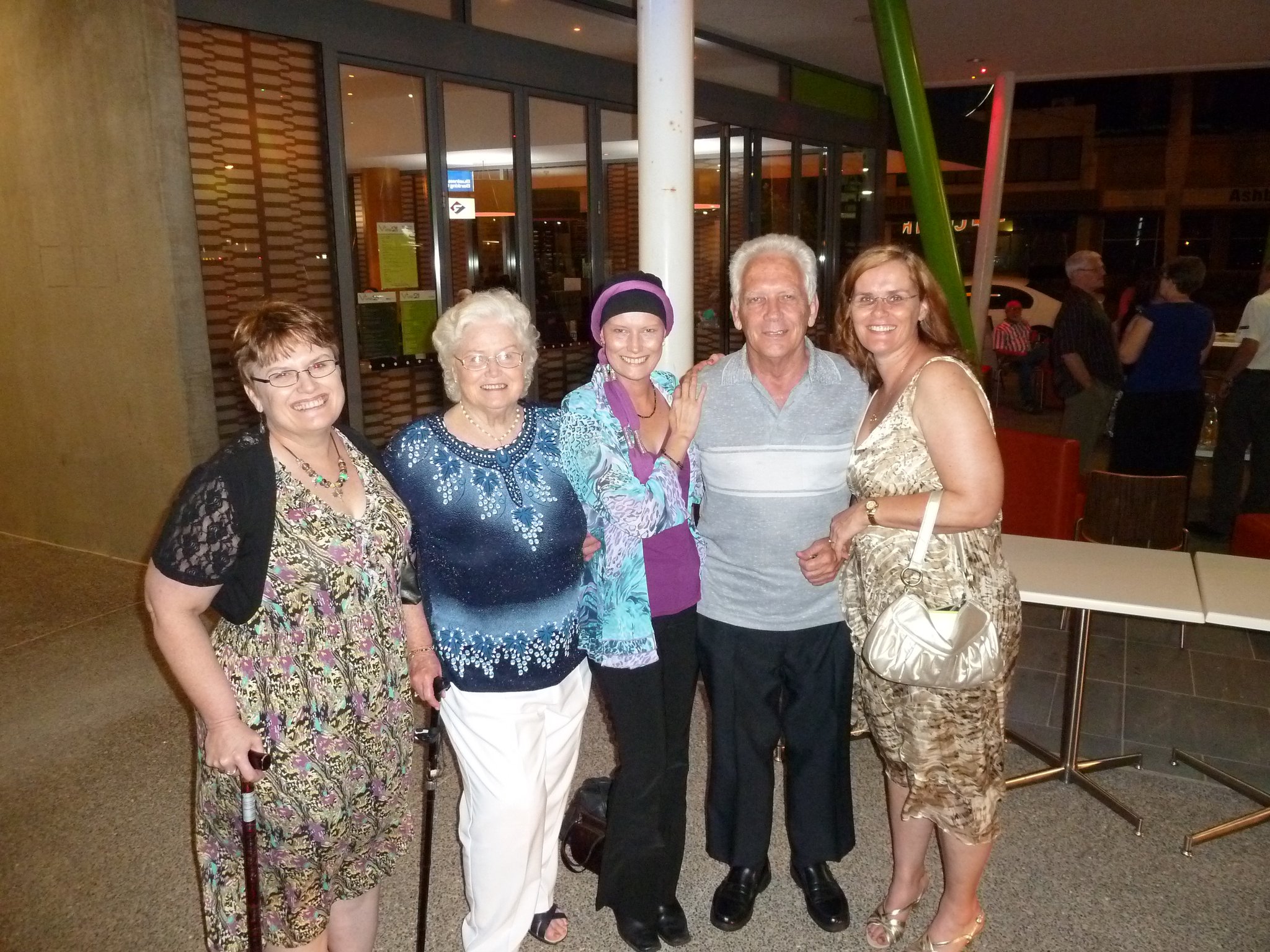 Marriage is NOT always smooth

My mum and dad have been married for going on 63 years.  Hasn’t always been smooth riding.  We learned marriage is not always smooth, and sometimes you might want to escape, and even may.  That doesn’t have to mean the end IF you have an intention to succeed.  You still get to decide whether you want to make it work or not.

I thank my dad for being a model of excellence in being human.  How to navigate difficult circumstances and keep moving forward.   Both my parents found ways to make what had to have been difficult experiences for little kids as best they could.  Not every memory is happy, though there are positive meanings associated with much due to how they supported us.

Dad modelled that perfection is not a parental requirement.   Often mitigating mum’s anxiety for doing well that could lead to her defensiveness.

He lived that being good enough, caring for us and our wellbeing.  We knew we were important and were valued through his actions. 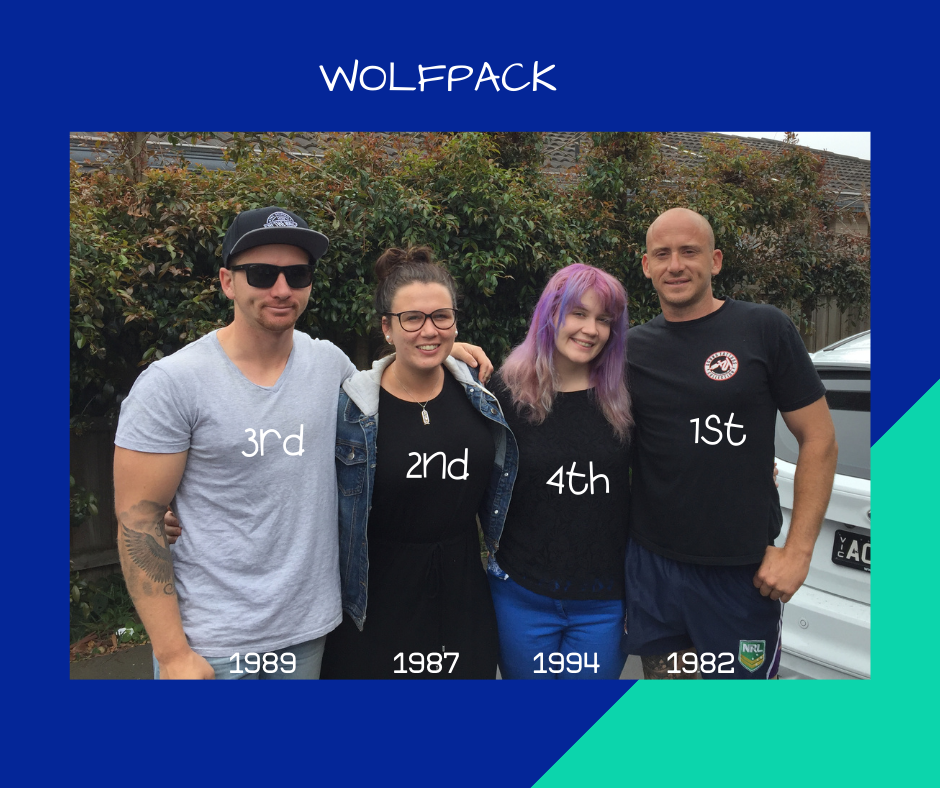 If you are in the trenches of parenting,

come join me in

where you can access tools, strategies and support, to assist you in raising children to become emotionally intelligent and resilient to meet the needs of Adulting in the 21st century.